Oakland Sideshows: Should They Be Legal? 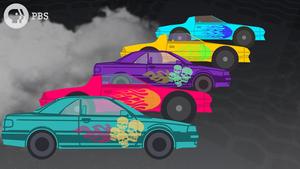 In this week’s episode of PBS Above the Noise, OMI cadets in the Student Reporting Labs program researched, wrote the script and filmed the interviews about Oakland Sideshows. http://bit.ly/ATNOaklandSideshows
What do you get when you mix car stunts, youth culture, and Oakland? Sideshows! Started in the 1980s, sideshows have become big in Oakland. Drivers block major intersections to perform car stunts like donuts and figure eights, while large crowds gather to watch. But here’s the catch-- they can be real dangerous and because of that they are totally illegal.

Sideshows are creating a huge divide in the community, many supporters say sideshows are part of Oakland culture and are calling for legal safe venues. Others, however, view sideshows as a dangerous public nuisance and are calling for harsher legal penalties. So, OMI cadets in the PBS NewsHour Student Reporting Labs program are asking: what should Oakland do about sideshows?
http://bit.ly/ATNOaklandSideshows